Is this your listing? Update it now! | Testimonials

Call For A Free Consultation

The law firm now known as Begley, Carlin & Mandio, LLP, has its roots in the Bristol, Pennsylvania, law firm started by attorney Hugh B. Eastburn.

William J. Begley came to Bristol in the early 1930s and established his own law office in space rented from Mr. Eastburn. He developed an extensive practice in the fields of estate planning and administration.

In 1951, the three lawyers formed a partnership under the firm name Eastburn, Begley & Fullam. The firm continued to grow throughout the 1950s.

If approved, your testimonial will be displayed momentarily.

Email is not valid. 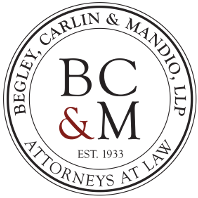 If you are the owner of Begley, Carlin & Mandio, LLP and would like to make changes to your business listing information, click here.